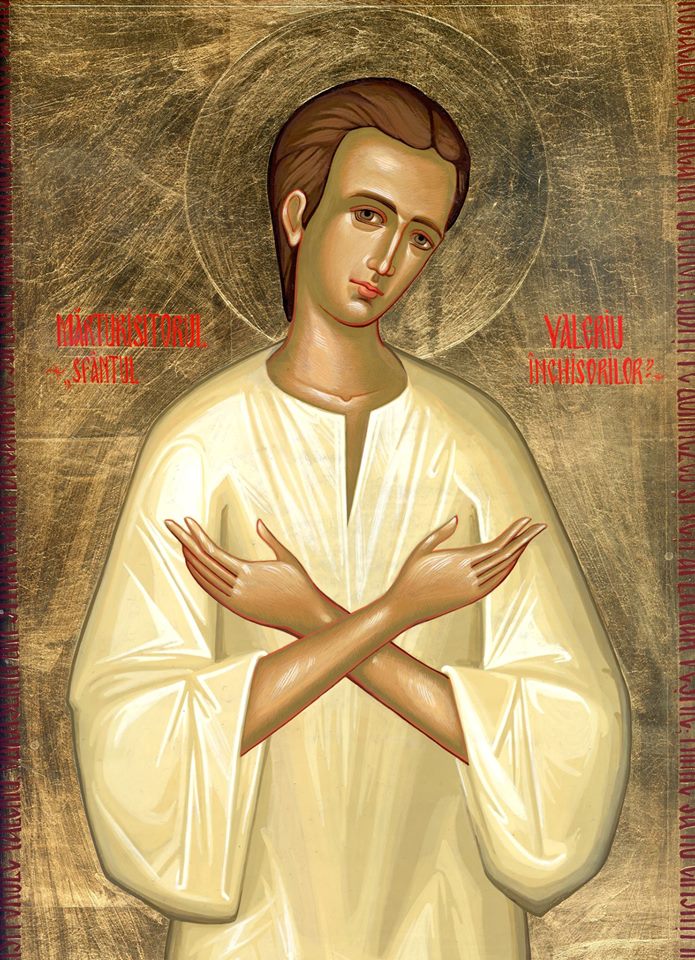 Valeriu Gafencu is a contemporary Martyr Saint of Romanian people. He reached the highest state of Grace during the comunist prisons, comparable to the Holy Fathers. He created a school for prayer during the prison; he was a real abbot.

“Through baptism, we received purifying grace, while being anointed with Holy Chrism, we have been adorned with all the gifts of the Holy Spirit. But this blessed internal state is ineffective within us, we are Christians in name only. We live in a world of confusion, of loose morals, of sin. It’s considered shameful to be a believer, and old-fashioned to be moral. The baptized man, in order to be saved, has to live all his life in the Holy Spirit, but we haven’t succeeded in doing this. We have believed, we have prayed, we have kept the faith, we have suffered, but in order to be united with Christ, one must purify oneself inwardly through confession and renew oneself through Holy Communion. Therefore unite yourself to Christ conscientiously and with great steadfastness, making yourself a bearer of His holiness, His power, His love, His light, His immortality. You must oppose sin mercilessly. Then you will be born anew. There is no path of compromise.”

I extracted some texts by Ioan Ianolide, who knew him very closely and revealed the life of the martyrs from the communist prisons in the book “The return to Christ”.

“I have the strength to confess that I am a blessed man, since I met someone who truly had Christ living, thinking ,rejoicing and  triumphing within him: Valeriu Gafencu. We confess Christ, Christ who was living in Gafencu, the crucified Christ of the XXth century. “

In 1941, during the German-Soviet war, Valeriu was arrested together with a group of young students from Iaşi and sentenced to 25 years of forced labor, although he was guilty only exclusively of the moral and national education he supported. Therefore, he felt free from any guilt. Thus, in January 1942, he was brought to the Aiud penitentiary, with chains on his hands and feet, in order to execute the ruthless sentence.

In prison, Valeriu devoted himself to an intense theological reading, making a deep research of Orthodox spirituality. Among the books he read were Paterikon, The Salvation of Sinners, The Lives of the Saints, Imitation of Christ. He read Saints John Chrysostom, Basil the Great, Gregory Palamas, Gregory of Nazianzus, Ephraim the Syrian, John Damascene. He also studied Pascal, Bulgakov, Berdiaev, Papini, as well as all the courses taught at the Faculty of Theology. His reading focused mainly on the Holy Scripture. At the same time he prayed intensely in the solitude of the cell. His brilliant intelligence and pure soul quickly discovered the depths of Orthodox spirituality. If until now he had been a believer, now he became a living man; he had been animated by traditionalist Christianity and was now immersed in the most authentic spirituality.

Valeriu prayed a lot. He often fell to the ground and wept for mercy, help, and heavenly enlightenment. He gradually replaced study with prayer. At night he read the Chapel of the Mother of God, and during the day, the akathist. He went to services regularly, humbly confessed, and rejoiced. He respected the priests, although he did not find a spiritual father according to the depth of his soul. He liked to sing prayers and psalms. He did a lot of prostration, depending on his physical condition. The silence was complete, the isolation from the world almost total, so conditions favorable to the spiritual work.

Love made him share it with his friends on a deep and sincere level. He strove to fulfill his virtues, a process that would be completed over the years. He always confessed his thoughts with close ones and they continuously fought to cleanse from temptations. Every day he made order in his soul, he became different, he became accustomed to live in the Spirit, according to the Christian teaching. His spiritual growth was harmonious, tending to realize the new man. By the grace of God, he crossed the path of the most authentic Orthodox spirituality.

When he was feeling better, continues Ianolide, Valeriu spoke beautifully and with fervor, focusing mainly on his favorite subject: interior purification and union with Christ.

In 1943 Valeriu was isolated, together with others, in Zarca with a severe regime, without books, without contact with his family and with an insufficient ration of food, which dystrophied

him. He devoted himself entirely to the Jesus Prayer, saying unceasingly, “Lord Jesus Christ, Son of God, have mercy on me, a sinner!” The good beginning was set, the orientation was clear, so this period brought him a significant spiritual boost. The first years were for seeking for God, the next of tears and repentance, and then were years of talking to God, living with God, and uniting with God through prayer. The guide available to him was that little book written by an anonymous person, entitled The Russian Pilgrim. All other concerns have disappeared, to be replaced by prayer. The prayer, through the discovery of the inner light and the graceful light, revealed to him all the problems that preoccupied him, obviously not as a finding, but as a gift.

More about baptism as the way to enter the Orthodox Church