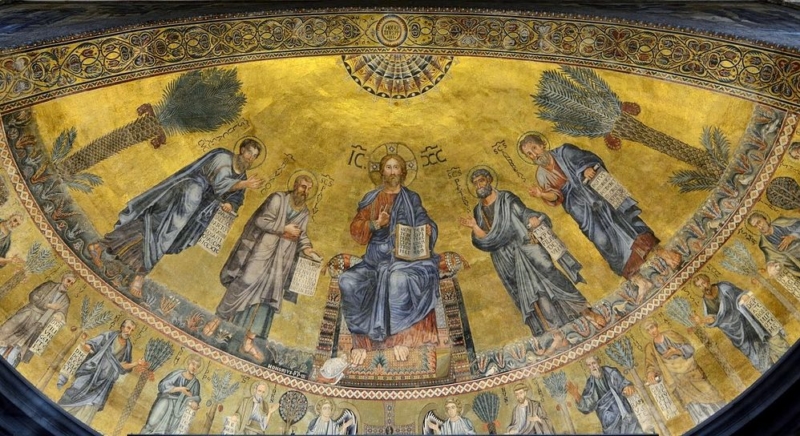 Reading the Synodikon on Orthodoxy Sunday in “Panagia Odigitria” Church of Piraeus (Greece, 17th of March, 2019)

Orthodoxy Sunday, the first Sunday of Great Lent, is when we celebrate the triumph of Orthodoxy and the restoration of the holy icons to the Church, when the heresy of Iconoclasm was defeated. We also read the Synodikon as a declaration of the Orthodox faith as the one true faith and we name all those who have defended our faith. We also declare anathema to all those who have fought against the Church of Christ. Above is a video of this service being celebrated in “Panagia Odigitria” Church of Piraeus, Greece with fr. Matthew Vulcănescu and fr. Angelos Angelakopoulos (video language is Romanian, anathemas are read starting with min. 18).

Full text in english of the Anathemas is below.

Anathemas against old and contemporary heresies:

2. Wulfila the semi-Arian, Nestorius, Macedonius who say that Trinity suffered and Ualentin: Anathema!

3. Gnafens Peter, who said: “Holy immortal whom has been crucified for us”: Anathema!

4. Paul of Samosata and Teodotion: Anathema!

6. Jacob the Armenian, Dioscorus of Alexandria and Severus, Sergius, Paul and Pyrrhus, with Sergius’ the disciple of Peter Liko: Anathema!

7. Origenists and those along with them: Anathema!

8. The fallen and the anticanonical patriarchs denying the Fourth Ecumenical Synod, Karekin II of Armenia, Theodoros II of Egypt, the Coptic Patriarch, Paul of Ethiopia, Ignatius Ephrem II of the Syrian-Jacobites, Baselios Thomas of the Malabarians – Indians, who mistakenly call themselves “orthodox” and those who are in communion with them: Anathema!

9. Those who deny the Holy Ecumenical Synods, IV, V and VI, monophysites, monothelites and monenergists: Anathema!

11. The frightening assembly against the venerable icons: Anathema!

12. Those who deny the Holy VII Ecumenical Council, those who do not worship our Lord Jesus Christ, in the icon depicted after His human nature: Anathema!

14. Those who teach the neo-Varlaamist heresy; which teach that the Grace of God is created instead of uncreated: Anathema!

15. The blasphemer of Christ, Francis of Assisi with all the papists’ liar-saints: Anathema!

16. The baseless heresiarch Pope Francis I of the old Rome, who has fallen according to the Canons, and those who are in communion with him: Anathema!

17. Those who teach that the Orthodox Church is a “sister Church” of the Roman-Catholic congregation and other heresies: Anathema!

18. Martin Luther, John Calvin, Ulrich Zwigli, Henry VIII, the ungodliness king, and those assembled together with them and all branches of the Protestants: Anathema!

19. The heresiarch of the religious congregation of Anglicanism, Justin Welby, and those who are in communion with him: Anathema!

20. Those who deny and defame the Mother of God, the Trinity one in essence and undivided, rabbis of Judaism, Islamists and members of the “Watchtower” society of Jehovah’s pseudo-Witnesses: Anathema!

21. Those who defame the sacraments of the Church; Baptists, Adventists and Pentecostalists and all branches of the neo-protestant congregations: Anathema!

22. To those who preach and teach inter-Christian ecumenism and inter-religious pan-heresy: Anathema!

23. Those who preach and teach the post-patristic and post-canonical heresy, who say that the teachings of the Fathers are obsolete: Anathema!

24. Those who deny the Eighth and Ninth Ecumenical Councils, from the time of St. Photios the Great and St. Gregory Palamas, Papal-Filioquists: Anathema!

25. The so-called “World Council of Churches” (of heresies) which teaches that each Protestant branch is part of the Church of Christ and those who take part in common prayers in the blasphemy and transgression of the Canons, the so-called” Week of Prayer for Christian unity in January” considering the heretics as “brothers in Christ” Anathema!

27. Those who teach that the Church includes all confessions that have departed from Her as “deficient churches” and those who say that there are Holy Sacraments, saving Grace and holiness outside the Orthodox Church, the One, Holy, Catholic and Apostolic: Anathema!

28. Those who teach that the Ecumenical Patriarch is “primus sine baribus” i.e. the first without equals: Anathema!

29. The heretical texts of the ecumenist pseudo-synod of Crete in June 2016, called “Holy and Great Council of the Orthodox Church” and those who receive them and put them into practice, texts which:

– Enshrine the so-called “restoration of Christian unity” and the historical name of churches for heretics;

– Enshrine the so-called “World Council of Churches” as a basis for dialogue with heretics – dogmatic minimalism;

– Enshrine the Toronto Declaration, which states that there are members of the church outside the walls of the Orthodox Church and that the Church of Christ is more than a confession of every member of the so-called “World Council of Churches’ in part;

– Enshrine mixed-marriages (with heretics) through the false stewardship;