Metropolis of Piraeus condemns ecumenistic statements from Patriarch of Alexandria 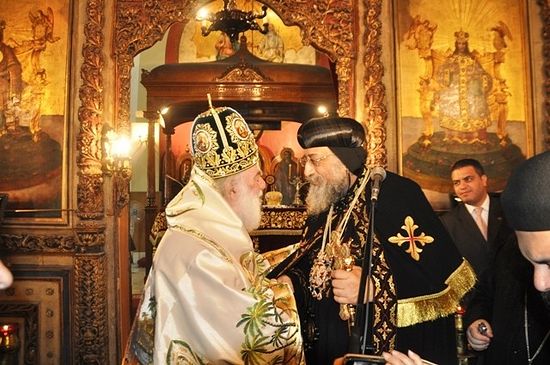 However, beyond exchanging greetings and pleasantries, Pat. Theodoros told the Coptic Pope: “Our Churches are one Church, headed by Jesus Christ,” although the Coptic church has been separated from the Orthodox Church since the 5th century.

In a new statement, the Office of Heresies and Cults of the Metropolis of Piraeus of the Greek Orthodox Church, condemns the Alexandrian primate’s ecumenistic statement, as well as another recent statement of his regarding Islam. The statement is published in Greek on vimaorthodoxias.gr.

The Metropolis of Piraeus, under the leadership of His Eminence Metropolitan Seraphim, is known as a staunch defender of traditional, Patristic Orthodoxy.

“As we have repeatedly emphasized, the pan-heresy of Ecumenism proceeds unscathed, with no hope at present for its repression and Synodal condemnation,” the statement begins. Ecumenism is a forerunner of the antichrist, the Metropolis states, as “It methodically and progressively erodes consciences and with the pretext of love, peace and exchange succeeds in dominating the vast and overwhelming majority of the ecclesiastical hierarchy, monasticism, and academic theology.”

Having recounted the apostolic witness against heresies and Ecumenism, the statement continues:

“With surprise, but also anguish of the soul, we have once again been informed on the internet of two very serious slips by His Beatitude Patriarch Theodoros of Alexandria. We felt it appropriate in this case not to remain silent. And this is because these declarations do not refer to other matters, but to matters of faith, for which we are all responsible, as the precious treasure of faith is not the personal property of the bishops and prelates, which they can manage as they want, but the common property of all of us.”

The first “serious slip” refers to Pat. Theodoros’ meeting with Pope Tawadros. Noting that the Metropolis had previously condemned statements of Pat. Theodoros to Pope Francis in 2013, the statement continues: “The Copts, this otherwise sympathetic, kind, and friendly religious community of Egypt and other neighboring countries, were cut off from the united and indivisible body of the Church in the mid-5th century AD.”

“For more than 16 centuries, despite the efforts of our Church to restore the Monophysites to Orthodoxy, they have unfortunately still been cut off from it, believing that we are ‘heretics,’” the Metropolis recalls.

We wonder if His Beatitude Patriarch Theodoros, living closely with the Coptic community, has not studied the dogmatic teaching of our Church and the decisions of the Ecumenical Councils? Was he not obliged, in view of his fearful oaths of ordination, but also of his Patriarchal capacity, to call upon the heretical Coptic “patriarch” to abandon his error and join the Church? If he believes that “Our Churches are one Church, headed by Jesus Christ,” then why doesn’t he proceed to the common chalice and cede his position on the one patriarchal throne of Alexandria?

However, Pat. Theodoros recently made an even worse statement, according to the Metropolis of Piraeus. On the feast of the Nativity at the Church of St. Nicholas in Cairo, he stated that, “In the holy mosques, God is worship according to the Koran!”

This statement recalls those of his predecessor, Patriarch Parthenios, who regarded Mohammed as a “true prophet of the one God” and the Koran as “holy,” the Metropolis writes.

“Can he honestly tell us, is there a connection between the idolatrous Allah and the Triune God revealed in Christ? Can the bloodthirsty ‘god’ of Islam be identified with the God of love of the Gospel?” the statement asks.

“Is there a Divine revelation other than Christ? Only horror, frustration and worry can make such unacceptable statements!” it continues.

Closing our comment, we emphasize yet again the dire captivity of many of the leading ecclesiastical persons (Patriarchs, Archbishops, Bishops, professors of theology, etc.) to the ecumenistic slippery slope, which without doubt will lead them, if they do not repent, with mathematical accuracy, to eternal loss… We wonder if the Holy Fathers, in matters of faith, resorted to diplomacy, and economies, to reconcile the irreconcilable, or did they struggle with consistency and stability, even unto death, in the confession of faith? Did they try to be consistent with Orthodoxy, but at the same time to ‘have a good time’ with heretics?… Let’s hope this humble communication of ours will help him the otherwise dear and sympathetic Beatitude Patriarch Theodoros, to rebut the inept and anti-orthodox things he has said and done so far.

Piraeus, Greece, February 6, 2020
Office of Heresies and Cults of the Metropolis of Piraeus of the Greek Orthodox Church

Fr. Matei Vulcănescu (priest in charge of the community of Saint Edward the Confessor and Saint Parascheva, Liverpool)

Sustain the effort of online publishing!