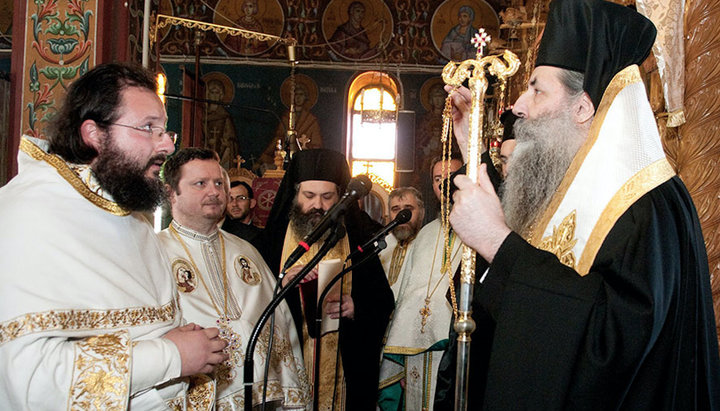 Protopresbyter Matthew Vulcanescu anathematized those who participate in communal prayers with heretics, sectarians, schismatics, and Catholics.

On March 8, 2020, on the Day of the Triumph of Orthodoxy, clergyman of the Piraeus Metropolitanate of the Greek Orthodox Church, rector of the church in honor of the Virgin Hodegetria, Protopresbyter Matthew Vulcanescu, anathematized Epiphany Dumenko and the doctrine of the “primacy without equality” of the Patriarch of Constantinople.

The priest’s anathematical video was posted on his YouTube channel.

The priest anathematized the heretical teaching on the primacy of the Patriarch of Constantinople in Orthodoxy (according to which the “Ecumenical Patriarch is the first without equals: ‘primus sine paribus’”) as one of the forms of papism and also called Epiphany Dumenko a “pseudo-bishop” having anathematized him with “his pseudo-synod”, i.e. the OCU.

In addition, Protopresbyter Matthew anathematized “papal filioquists” (supporters of the doctrine of the descent of the Holy Spirit from the Father and the Son – Ed.).

The heresies of the “World Council of Churches”, as well as the dogma “that every Protestant branch is part of the Church of Christ”, were also anathematized.

Those involved in communal prayers with heretics, sectarians, schismatics, and Catholics, as well as all participants in the Week of Prayer for Christian Unity in January, who view heretics as “brothers in Christ,” were anathematized.

“Those who teach that the Church includes all the confessions that departed from Her as ‘inferior Churches’ and those who say that there are Holy Sacraments that have grace and holiness outside the Orthodox Church, the One, Holy, Catholic and Apostolic” were also subject to anathema.

Earlier, the UOJ wrote that, according to Protopresbyter Matthew Vulcanescu, Epiphany is not even a layman, because he is outside the Church.