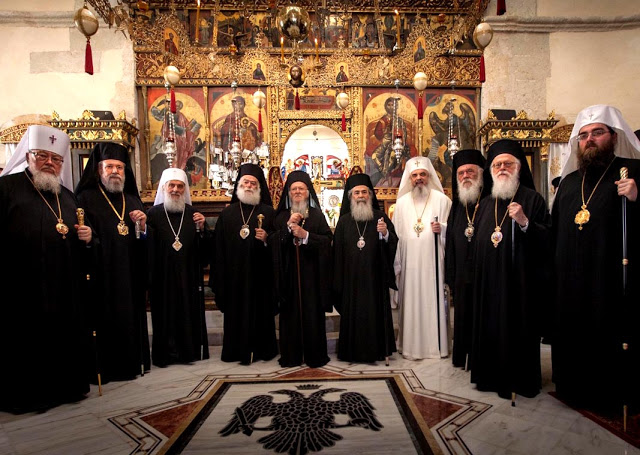 Through the false “Holy and Great” Council of Crete 2016, the synodal structure of the Orthodox Church has been replaced by the authority of a sole primate (using a model of papist origin) in matters of Autocephaly recognition and on an ecumenical level.

This is the reason why the “Council” of Crete has been viewed by many as an extended synaxis of some of the Local Churches’ Primates. Moreover, Archbishop Anastasios of Albania confessed that such a “synod” does not follow the tradition of all historical Councils of the Orthodox Church and that it represents a new type of council, one that had never existed in the history of our Church.

The Primates of the various Local Churches only serve an administrative role, they differ in no way from any bishop of the smallest diocese in the Orthodox Church. They do not have the right of decision making on behalf of the entire Church, but only as part of a Synod. That is, together with all the bishops of the Local Churches.

Due to the role that was played by the ten Primates participating in Crete but also due to the exclusion of bishops from the decision making process, the “Council” of Crete has in fact contributed to the eradication of the Synodality of the Orthodox Church. Instead, it has promoted an organisational structure that is characteristic of papacy: one “pope” and nine “cardinals” being the only decision making actors. Only one vote was reserved to each Local Church and all the participating Primates have been allowed the entire decision making power without the consultation of bishops, priests, theologians or laymen. All these participants were prohibited from playing their expected role in a pan-orthodox council.

This is how the Synodality of our Church has been dismantled: by producing an organic fracture between the ten participating Primates of the Local Churches and the entire Pleroma of our Church (bishops, presbyters, deacons, laymen). It can only be named as clericalism. This elitist model of decision making is anti-Evangelical, anti-episcopal, anti-hierarchy.

One of the effects of the Crete Council is the Patriarch of Constantinople’s granting of Autocephaly to some schismatics (devoid of apostolic succession) in Ukraine. In addition to this it establishes the idea of abolishing the boundaries of the Church by creating a false blasphemous conscience: that the Church of Christ is more than the Orthodox Church, it is a Church that will be recomposed through the restoration of a lost “unity”. Based on the decisions of the Crete Council this is now possible, given that its documents recognize that there is also Church outside the Orthodox Church, a Church which is not complete, but it exists, so it can be recognized, granted Autocephaly, declared Orthodox without repentance and without first renouncing schism and heresy, without readmission in the Church of Christ.

This is what the Ecumenical Patriarch says: “As a Mother Church, it is natural to wish for the restoration of the unity of the divided ecclesial body of Ukraine, a faithful people of tens of millions, baptized and enlightened through the direct care and missionary activity of the Ecumenical Throne.”

So for the Patriarch of Constantinople the schismatics and the orthodox form together an ecclesial body… which is divided.

The Romanian Patriarchate comes up with the idea of solving the problem in Ukraine through a synaxis of the Primates (according to the Cretan model). In other words, one can observe the same papist mentality here. The primates only are to decide, not the Church, not the Ecumenical Synod, not the Pleroma.

Unfortunately, the lack of synodality at the Local Council level is also reflected at pan-Orthodox level, where the little popes decide the “fate” of the Church, according to their vision…

This plague of the Primates’ dictatorship has been haunting the Orthodox Church since the times of Turkish domination when the Patriarch of Constantinople was named Etnarh by the Sultan. A period when the Church was not in freedom. Now, however, this state is not justified under any form.

The Orthodox Church must escape from the Babylonic captivity of ecumenical heresy and papism and the synodal system must become functional once again. The laymen, as an integral part of the body of the Church, are not voiceless sheep, but are a royal priesthood, receive charisms from the Holy Spirit and have a role in the Councils, have the right to speak in the Councils. Even the papist heretic councils were more democratic than the council of Crete.